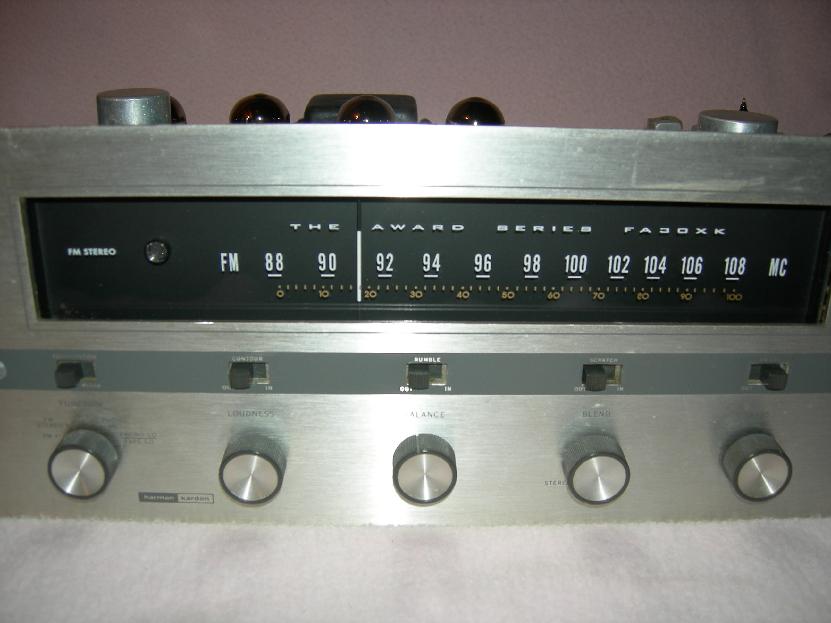 This is a Harman-Kardon receiver I built from a kit in 1964 for a High School Electronics shop class. This receiver cost $250 in kit form in 1964.

The cabinet is one that I made in 1973 from solid walnut. This cabinet is not the one Harman-Kardon sold for this receiver.

The receiver has been electronically restored. I still have the assembly manual and schematic making it easy to work on.

Several years ago my parents gave me this receiver when they purchased a new system. It actually played pretty good, but I decided that a full restoration was in order. There is really not much damage or wear on the receiver except for the normal wear for a receiver that is 40 plus years old. The first and most challenging restoration challenge was to restore the dial glass after my failed attempt at cleaning. It appears that Harman-Kardon applied a water-based paint or decals on the back of the glass. Of course I started cleaning the glass only to find all the lettering coming off the glass. I had the lettering silk screened back onto the glass. I have to admit, they did a marvelous job restoring the lettering. You can’t tell it’s been re-done.

The electronic restoration consisted of:

Now that it is restored it sounds just fantastic.  In the last picture you’ll see this receiver in a stereo system that includes a Philips Streamium media player.  I can play Internet Radio, my CD collection, and Rhapsody music through this wonderful tube receiver.  This is the best of new and old technology.  CD quality music playing through a vintage tube receiver – the sound is fantastic.

Update: There developed a crackling in one of the speakers and I ended up having to have the audio output transformers rewound. Apparently the insulation on the wires broke down.