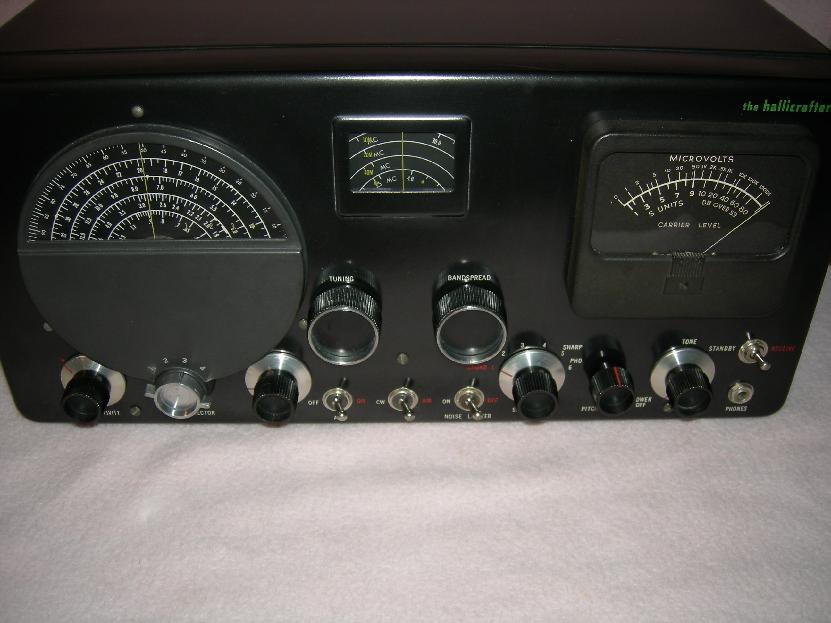 This S-76 was manufactured in 1952.  The S-76 is a double conversion superheterodyne receiver with 10 tubes.  It has an extremely large S-meter.  For those of us that are a little older and our eyesight not what it used to be, this is a very easy S-meter to see.

When I received this receiver it barely worked.  As I started replacing the old wax capacitors, the local oscillator would come and go.  Sometimes it would work, and other times it would not.  I make it a habit to check the operation of the receiver after each capacitor is replaced.  It is much easier to fix a wiring problem as it happens, rather than realizing when all is done that there is a problem and then trying to find the error.  As I got deeper into replacing the caps in the IF section, the receiver began to get more stable in operation.  One of the paper capacitors actually had overheated and end of the cap was blown out.  This is testament as to why all old wax capacitors need to be replaced.  If they have not failed yet, they will.  I even removed the 2nd IF unit chassis off the main chassis to replace the wax capacitors in that chassis.  This required unwiring the 2nd IF chassis so it could be removed completely from the main chassis.  This was a lot of work, but I restore all my receivers to be very reliable and I want to use them regularly.  I replace all wax capacitors no matter how hard they are to reach.  My experience is that just about all the old wax capacitors are leaky.  Leaky capacitors will put a DC voltage where it does not belong, and this can be taxing on the power supply and other components.

I also replace the power supply electrolytics because of the potential catastrophic failure of the old electrolytics.  It is not worth the risk to leave them in operation even if the receiver works well and they seem to work fine.

I replaced the power cord, added an in-line fuse under the chassis, and installed an inrush current limiter.  Fuse protection on these older receivers is important to keep them from self-destructing f something should fail.

Cosmetically the cabinet is in excellent condition.  The paint was very badly oxidized when I got it.  Once the front panel was removed and everything cleaned and the paint reconditioned, I found that the paint was actually in great shape.  The lettering on the front panel is remarkably good.  This receiver does not show the normal signs of wear such as the lettering being worn off from heavy use.

This is a fun receiver to use, but I find it a bit touchy on the main tuning.I  have to generally use the bandspread tuning to tune a shortwave station to the exact frequency.  The main tuning is just a bit too coarse.  The only other criticism I have of this receiver is the tuning feel.  It does not have a flywheel and it feels chintzy.

SSB reception is really not bad either.  If the AVC is turned off, the Sensitivity turned down, and CW mode selected it actually will pick up SSB fairly well.  The stability is pretty good for a receiver of this age.

I find the audio to be pleasant for single ended audio output.  It has enough audio power to sound strong without a lot of distortion.  Overall a nice vintage receiver.