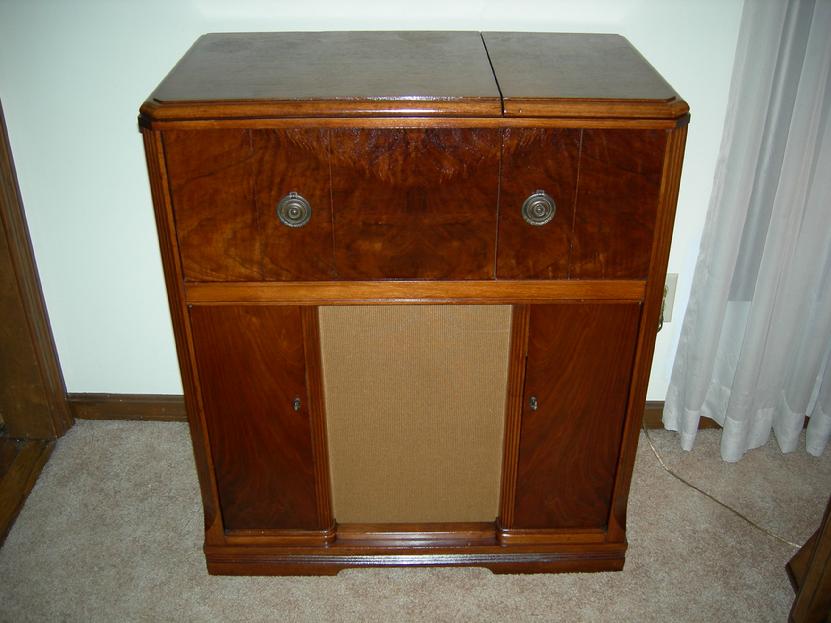 This is a Sparton 7-46 that has been completely restored. The Chassis was in remarkable shape. There is no rust on the chassis and the power transformer paint is in excellent shape. There have been some repairs done over the years. Based on the components used in the repairs, I believe that it was repaired in the late 50s or early 60s. The power supply filter capacitors and one capacitor in the amplifier section were replaced along with the output transformer mounted on the speaker. The tubes all tested out as if they were brand new.

The chassis was restored by replacing all wax and electrolytic capacitors. A line fuse and inrush current limiter were added for protection and to slowly power up the vacuum tubes.

The push-pull output using 6F6 tubes of this radio gives it a very strong sound. The shortwave band picks up quite a few stations with the built in antenna. This antenna is just a piece of wire running around the inside of the cabinet in the back.

As you can see, the cabinet was in terrible shape. There was a lot of de-lamination of the veneer. The veneer was repaired and the old finish removed. There were two water stains in the top of the cabinet. These were not removed. The only way to remove them is to bleach the cabinet and I don’t like to do that because of the risk of further wood damage if not done carefully, and the fact that the patina of the wood is ruined. A lot of the character of the older radios is in the patina of the wood and the finish. If the finish is badly damaged, there is not much choice but to remove it and apply a new finish. I try not to remove an old finish if there is any reasonable chance of restoring it. In this case the finish was very badly damaged and could not be restored. In fact the finish was so bad that it detracted from the overall aesthetics of the radio as can be seen in the pictures.

I’m very pleased with this restoration. The radio looks very good and plays remarkably well. I’m still very impressed at how well these older radios sound after a restoration. Because of the quality of newer components, I believe these radios actually sound better than they did when they were brand new. This radio should play and perform well for many years to come.